Get fresh music recommendations delivered to your inbox every Friday.
We've updated our Terms of Use. You can review the changes here.

Somebody Will: Teaching Collection 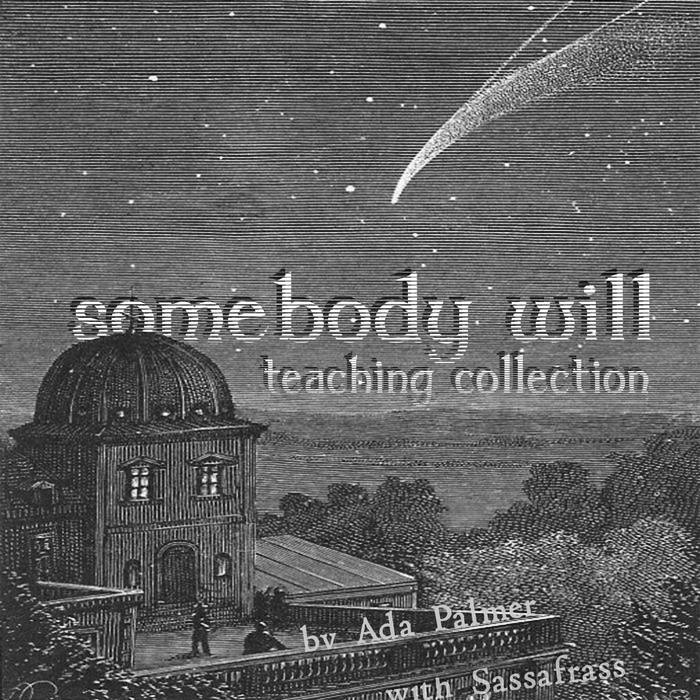 A collection for our space exploration anthem Somebody Will.

Includes three performances: a newly recorded duet version, the live chorus version performed as an encore for the Balticon debut of Sundown, and a live house concert recording of the duet with guitar. Also included are alternate versions of the duet with the melody and harmony parts amplified, to make them easy to learn.

Also includes five PDF files: a lyrics sheet with guitar chords, and four versions of the sheet music, one for the duet, one for the trio, one solo with guitar, and a separate arrangement of the duet for guitar, with a slightly different harmony line to fit with the guitar chords.

This song and its message mean a lot to me, and I'm always deeply moved when other people feel the same way. All my work, my teaching, history research, but especially my science fiction aims to help us take one more step on the long road to the stars, and this song is my celebration of the community of people who feel the same way. The community of people who read, produce and love science fiction and fantasy is not about escapism, but about excitement, creativity, thinking about many different worlds, societies and possibilities, and working hard to create the best future we can. Ours is a community of action and optimism, galvanized by the art and literature produced by those Ursula Le Guin has described as "realists of a larger reality," and the work we do galvanizes and inspires scientists, inventors, social reformers, and all sorts of future-makers.

I have had the privilege to meet many people who feel as I do about our community of future-building. For that reason, I love sharing this song, singing it with new people, and passing it on to others. As you can hear from the live Sundown encore recording, it is difficult for me and the other performers to get through this song without crying, especially when the audience joins in with us, at moments like the one you can hear so clearly in the recording. Also very powerful for me is the fact that the guitar parts in these recordings were played by my editor from Tor, Patrick Nielsen Hayden, who feels as I do about the future, and teams up with authors like me to make our messages stronger, and help them reach farther. So please join in and sing along with us as we all share the anthem that banishes doubt!

LYRICS TO SOMEBODY WILL:

Our new world is so close.
Mars has treasures we’re only just starting to find.
Frozen mountains and crimson dust waiting for footprints that will not be mine.
A hundred years to run the first tests
another to raise the first dome.
The moon, then Mars, then Titan next,
a life time to touch each new home.
And I want it so much.
Close my eyes, I can taste the Mars dust in the air.
In the darkness the space stations shimmer in orbits that I will not share.
But I’ll teach the student
Who’ll manage the fact’ry
That tempers the steel that makes colonies strong.
And I’ll write the program that runs the computer
That charts out the stars where our rockets belong.
It will never get easy to wake from my dream
When the future I dream of is so far away.
But I am willing to sacrifice
something I don’t have For something I won’t have
but somebody will someday.

And it feels like a waste.
All this working and waiting and battling time,
And all for a kingdom that all of my efforts will never make mine,
But brick by brick the Pyramids rose,
With most hidden under the sand,
So life by life the project grows
In ways I might not understand.
I am voyaging too,
We will need the foundation as much as the dome for those worlds to come true,
And I’ll clerk the office that handles the funding
That raises the tower that watches the sky.
And I’ll staff the bookstore that carries the journal
That sparks the idea that makes solar sails fly.
It takes so many sailors to conquer an ocean
And so many more when it’s light-years away,
But I am willing to sacrifice
Something I don’t have for something I won’t have
But somebody will someday.

It’s so easy to run.
Hide away in my books, games and fantasy plans,
Let them call me a coward who can’t face reality’s grownup demands,
But if I love my fantasy worlds
It’s not fantasy love that I feel.
And so much more I feel for this
The world that created them,
World we create with them,
One chance to make them all real.
And I know we won’t stop.
We’ve planned too many wonders for one little star.
Though often the present may seem too complacent to take us that far.
But I’ll tell the story and I’ll draw the picture
And I’ll sing the anthem that banishes doubt,
And host the convention that summons the family
That carries the fire that never burns out
There are so many chances to give up the journey,
Especially when it’s so easy to stay,
But I am willing to sacrifice
Something I don’t have for something I won’t have
And not only me,
But we are willing to sacrifice
Something we don’t have for something we won’t have
So somebody will,
So somebody will someday.

Bandcamp Daily  your guide to the world of Bandcamp